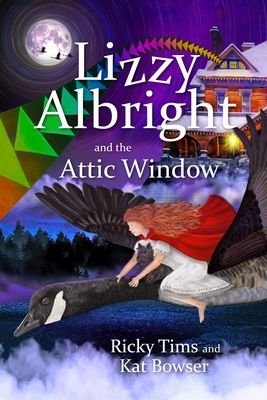 Paperback. 352 pages. A fantasy fiction novel by Ricky Tims and Kat Bowser. An over-imaginative girl, an antique quilt, a goose named Gretta, and a cursed kingdom, combine to provide the foundation for a fantastic story filled with surprise, wonderment, betrayal, bravery, mystery and intrigue.

Ricky TimsRicky Tims has enjoyed a long and diverse career that coalesced from a variety of creative art forms. He is well-known in the international quilt industry as a TV host, best- selling author, teacher, award-winning quiltmaker, fabric designer, inspirational speaker, and live performance entertainer. He was selected as one of the Thirty Most Distinguished Quilters in the World. The readers of Quilter's Newsletter Magazine voted him (in a three-way tie with Alex Anderson and Karey Bresenhan) as the Most Influential Person in the Quilting Industry. The popular national television news show CBS News Sunday Morning featured him as one of their profiles.Ricky, a gifted musician since early childhood, is a pianist, conductor, composer, arranger, music producer, and performing artist. With the publication of this book, he adds novelist to his long list of creative endeavors. Ricky was born and raised in North Texas, but now resides on a remote mountain not far from the small town of La Veta in Southern Colorado.

Kat BowserKat Bowser is a dynamic vocalist and consummate entertainer. Her performances- ranging from her remarkable tributes to Janis Joplin to her intimate piano bar weekends on Fort Lauderdale Beach-have thrilled local music lovers and tourists from around the world. She has toured internationally with recording artists Oleta Adams and Jon Secada, opened for Tony Bennett and other celebrity vocalists, and performed with a who's who of recording artists like Sam Moore, Robben Ford, Russ Taff, Don Felder, Carl Verheyen, and Larry Dunn.She has been an integral part of the studio scene for years. Kat's voice has appeared on hundreds of records. An LA session guitarist and member of the English rock band Supertramp, Carl Verheyen, says, "I've met many studio singers on the LA session scene, but none quite as versatile as Kat Bowser. Her range is from Janis to Ella and everything in between. But it's when she sings with her own unique voice that her emotional impact is the most powerful!" Kat is a native of Overland Park, Kansas, a suburb of Kansas City, now residing in Fort Lauderdale, Florida.